From K - On the road

This week has been more than a tad chaotic. Some of our closest friends made an impromptu detour on their way home from a wedding last weekend, and we had the pleasure of hosting them for a few days. Somehow the new craft room has been a magnet to guests, so maybe I was a little premature on ditching the queen sized bed...

I had originally planned to complete the finishing touches on the design board later in the week but instead got pulled out of town on business. In the past two days I have 25 hours in cars, planes, and helicopters, but hearing about the amount of travel required, I made sure that I left home prepared.

Being the fidget that I am, I hate to waste time traveling without working on a project. What is my craft of choice on trips like these you might wonder? Well wonder no more because I spent a fair chunk of time these past few days doing this in transit and at hotel rooms... 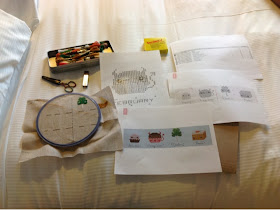 Amanda and I both signed up for the Dessert of the Month Club cross stitch back in late January but I've had minimal success keeping up so far. The first time I started I didn't have a large enough piece of linen, the second time my linen was distorted which messed with the dessert shapes, so this week I figured I might as well take another stab at it. I'm ever so slowly making progress again. 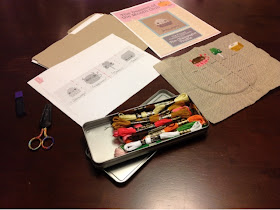 I walked in my front door from my work trip and in less than 12 hours from now I'll be hitting the road again. Tomorrow we're heading out to our cabin for the long weekend up here in Canada 'eh, and I will be sure to pack a couple of fabric essentials. I'm hoping to knock off two items from my Summer Sewing Hit List... Any guesses which ones? 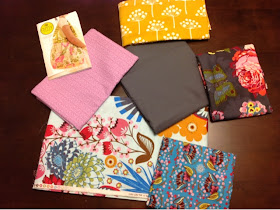 I'm sure I'm not the only crafter in transit this summer. What projects do you find travel well?
Kelsey at 22:44
Share