I recently bought an iPad and I cannot say enough about how much I love it. It has made blogging a cinch while on the run, it takes relatively high quality images when my DSLR isn't close at hand, and most of all, it makes for one of the best quilt top planning tools. I have tried designing quilt tops using blank paper, grid paper, excel, pencil, and markers, but nothing comes close to the TouchDraw app. I won't go into a huge explanation of how it works, but I thought it might be helpful for you to see how it can help organize a quilt layout, using my current wax print quilt as an example. 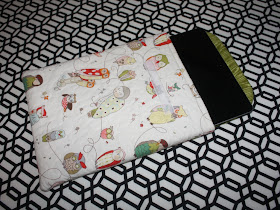 In July I posted about my quilt top layout for the first of two wax print quilts. I decided to go the route of using magic numbers (2.5", 4.5" and 6.5" square blocks), however I was worried that it wouldn't look random enough given the consistent sizes. In order to minimize the effect of having large stretches of blocks butted together, I went to touch drawer to lay out some "random-ish" type areas. 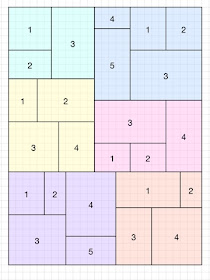 In the above image, you can see that each quilt area is divided by colours, and then further divided by numbers within each colour group. I specifically numbered them so that I would remember which order to sew the blocks once they were all prepared.

Using that TouchDraw illustration as a template, I began laying out my previously prepared 2.5", 4.5" and 6.5" squares according to the grouping requirements. Even though I have yet to complete the entire quilt top layout, you can see that many of the numbered blocks from my TouchDraw illustration are quite easy to identify on my design wall already. 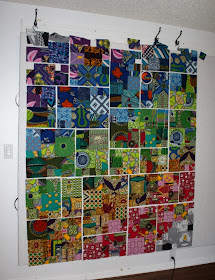 Once I had quite a few of my blocks complete, I thought I would sew a few blocks together to see how it came along. In this next image you can see that some of the numbered blocks on my drawing are now even easier to identify on the wall. 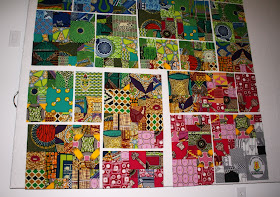 I've started using this tool on a couple of other future projects and I'm looking forward to seeing them come into fruition as well. I still have a lot to learn on this app, but so far I am pretty impressed with how easy it is to use, and how simple and quickly you can manipulate quilt top designs.